We love getting kisses from our doggies, but when they’ve recently been in the cat litter box, it’s a whole different story. This disgusting habit of snacking on feces (technical term being coprophagia) does not only cause smelly breath, but it can also lead to the spreading of parasites to your dog, other animals, and even humans.

While hookworms whipworms, and toxoplasmosis can sometimes be spread from cat to human (though not as common), roundworms are the most common parasite to transfer directly from pets to people, in fact the CDC found that approximately 13.9% of the U.S. population has tested positive to roundworms.

Giardia is another culprit that can be spread just by sniffing it! Giardia can cause a variety of unwanted symptoms such as diarrhea, vomiting, fever, muscle weakness, and even seizures.

Alarmingly, many of the zoonotic parasites are not only spread through the feces, but through saliva as well… how often does your dog lick your face?

Besides the contagions being a risk, the kitty litter itself is a hazard as the sheer mass that is eaten along with the droppings could harden and cause a serious blockage in your dog’s intestines – and surgery may be the only option to remove the obstruction.

How can I keep the litter box away from my dog?

The simplest solution should be to scoop often and change out the litter box regularly, right? Let’s face it, no matter how attentive we are towards the litter box, there will be many times when your cat goes while you’re not home, and if your dog is desperate, he’ll be sure to get to it before you even have a chance.

You could look into purchasing a self-cleaning litter box that will immediately clean itself once your cat has stepped out. Unfortunately for many, this is far from a solution as cats can become scared of the box and alternatively defecate on the floor, making their doodies an easier target for your canine.

If you have large dogs: 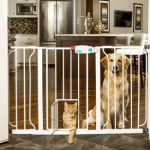 Option 1: Purchase a doggie gate for the doorway so that your tall dog is blocked and your cat can easily slip through the small opening towards the bottom. Note that the gate also has a one-touch release handle to swing itself open so that humans can easily get by too.

Option 2: Have a cat door installed in your door leading into a closed off room where the kitty litter resides such as a bathroom or laundry room.

If you have small dogs: 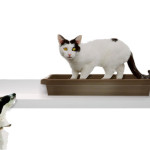 Option 1: Thankfully, dogs – unlike cats cannot jump and reach high-up surfaces. Try elevating the litter box with a piece of furniture so your dog can no longer reach it. Make sure your cat will feel safe enough to use it and there is no risk of it falling. 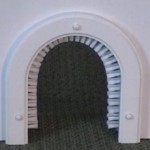 Option 2: Your dog may be close in size to your cat, but dogs are not quite as flexible. General cat doors will not stop your small dogs from walking right through, but a cat hole is smartly designed to deny your dog access. The cat hole is a arched opening with a brush lining the interior, cats are meant to squeeze into the space and let the brushes pleasantly groom their coat as they walk through to access the litter area. Dogs on the other hand cannot “squeeze” or contort their bodies nearly as much so as long as your dog isn’t super small, their head won’t fit through the shape and will be prevented from going any further.

Option 3: Another solution for when both your cats and dogs are of similar height is the use of a magnetic pet door. The way it works is that your cat (or any animal you wish to grant access) wears a special magnetic key collar that will “unlock” the magnetic flap on the door when it walks up to it.

If you have a mix of large and small dogs: 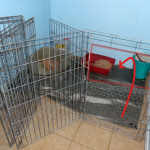 Option 1: Take advantage of your cats jumping ability! Purchase a dog pen just tall enough for a cat to jump over but too tall for any of your dogs to get past. Despite the fact that this setup requires a little more effort on the cat’s part to access the litter, they’ll appreciate the fact that they can utilize the bathroom in solitude, knowing that the dogs have no way of getting to them. 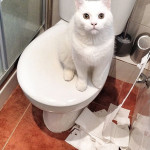 Option 2: Train your cat to use the toilet… even though this may sound far-fetched, if successful it would not only solve the poo-eating problem, but save you a bunch of money on litter as well! There are cat toilet training kits out there that include different sized toilet seats to help your cat transition.

Why does he want to eat poop anyway?

Here are the top reasons why your dog might be eating poop… cat’s or his own.

It’s in the blood

Why?
Your dog (along with a few past generations in his bloodline) may be domesticated, but there are still going to be several habits ingrained in the dna that stem from their ancestors’ way of living, dating back thousands of years. Back in the day when most dogs roamed wild, mother dogs would eat their newborns’ feces in an effort to clean the area and mask their scent from possible nearby predators. Believe it or not, this still exists today, and puppies are learning from their mother’s actions – so when they see the mom gobbling up the poo’s, they may choose to do the same and inadvertently continue the habit once they mature.

How to fix:
If your dog is still a pup, start keeping a close eye on him and as soon as he goes, quickly pick up the dung before he has the chance to “clean it up” himself. If your dog has already fully matured, hopefully he was adopted from a trustworthy breeder or shelter that continuously cleaned his area while he was still with the mother. 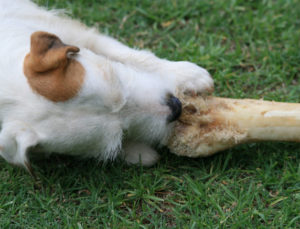 Why?
Another habit that your dog may have inherited from his feral ancestors is the need to scavenge. Feral dogs (along with present day wildlife) are always on the prowl in search of food for themselves and their pack. While homed dogs are cared for and have their basic needs satisfied, they still may get a thrill out of finding something on their own to snack on.

How to fix:
Try hiding some treats and toys around the house or in the yard, giving your dog the opportunity to forage and be proud of what he discovers (and hopefully forgetting about the poop). *Make sure the edible treats are safe for cats in case they find it first.

Why?
Perhaps the most exciting event he experiences while you are at work is his bowel movement. Many humans may go to access the fridge when bored even if they are not hungry, but since dogs have not yet mastered the skill of door opening, they are left to resort to their own poopies.

How to fix:
The trick is to stimulate their brain enough so they don’t feel the need to mess with their mess. Leave out plenty of toys including some dog puzzles that will take him some time to solve. Hire a friend, neighbor, or pet sitter to check in on him in the middle of the day and offer some playtime. Best advice – adopt another dog to play with that will keep him busy and entertained. 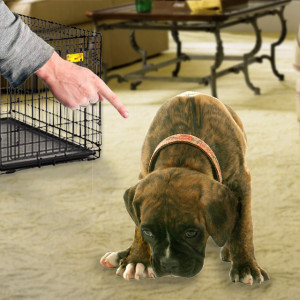 Why?
Stress can be caused by any number of things – thunderstorms, a new person or animal living in the home, a hidden injury or illness, a recent fight or argument in house, or even something as innocent as a new furniture arrangement in one of the rooms.
You can sense if your dog is stressed if he is whimpering, panting often, persistently barking, shedding excessive amounts of hair, repeatedly licking his lips, or yawning more frequently. Eating feces can be another way to calm themselves down, much like when a human chews gum or smokes a cigarette to ease some of the tension.

How to fix:
If you strongly feel it is stress-related, get to the bottom of it and remove the source. You may need to go to the veterinarian to determine if an underlying medical issue is causing the anxiety.
Know that the worst thing you could do is scold or punish your dog for eating feces as that will only lead to even more stress, especially if is his own. When yelled at he may think you are mad for him creating the feces in the first place and will then eat his poops even faster to hide the “evidence”. Instead, after he eliminates, reward him with a treat while getting him away from the “scene of the crime”, so you can quickly pick up the feces and discard it.

He thinks it tastes good! 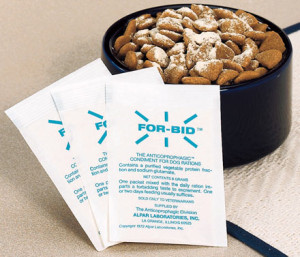 Why?
As gross as this may sound, dogs are actually much less selective than humans in terms of what they will chew on, Humans possess about 9000 taste buds while dogs only contain about 1700 – shockingly only tasting about 19% of what humans can taste.

How to fix:
Try formulated products such as For-Bid™ that contain monosodium glutamate – a non-invasive, biodegradable, and safe ingredient that will make the poops taste more acidic and far less delectable to you dog. 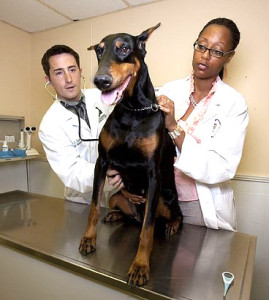 Why?
Not implying that you are starving your dog, but perhaps there is something wrong with his digestion system that doesn’t allow his body to properly absorb all of the nutrients from his food. Since his nutrients aren’t being absorbed, they will end up excreted with the stool, making his food smell and taste similar to the meal he just ate. In some cases, you may be able to spot undigested bits of kibble in his ‘outgoings’.

How to fix:
Be sure to make an appointment with your vet if you have any suspicions that a digestive disorder exists. Your vet may suggest purchasing a higher quality brand of food that contains more protein and less carbohydrates, a more moisture-dense meal that their body will have an easier time processing. Additional supplements are available to increase your dog’s metabolic and digestive enzymes to strengthen the stomach and intestines, as well as aiding in the major bodily functions to improve their overall health.

Stop your dog from eating kitty litter and his own poop!
Tagged on: pet advice 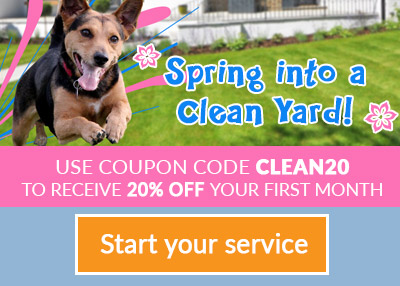