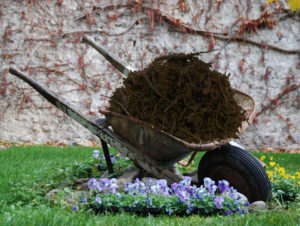 Mulch is a great way to maintain a healthy garden – it keeps your soil well-hydrated while suppressing unwanted weeds. For anyone wearing the hat of both a gardener and dog owner, the ongoing struggle always seems to be finding the right mulch that will suit your yard while providing a safe and enjoyable environment for your pet.

You may wonder is there a perfect type of mulch for a dog? The short answer – no. There is no universal mulch that can guarantee your dog won’t chew on it, pee on it, or walk on it, however we’ve put together some of the most common types of mulch and advise on which one to buy depending on the behavioral tendencies your pooch may possess.

First things first – which ones are toxic?

You can put your mind at ease knowing that most mulch is non-toxic, but there are a few that are quite hazardous to dogs and should be avoided. Cocoa mulch is one such mulch. Cocoa mulch, as you may have already guessed, is made from cocoa beans. Cocoa beans, similar to chocolate contain the chemical theobromine that is highly toxic to dogs. If your dog were to swallow some of the mulch, theobromine can enter their system causing cardiac irregularities, vomiting, diarrhea, seizures, and potentially death if enough was ingested. The main benefits of cocoa mulch are its fragrance and visual appeal, but clearly the longevity of your pup’s life far outweighs these superficial perks.

There are some wood-based mulches to look out for as well. Prior to the 2000’s, it was common practice to produce mulch from old treated wood. Although recycling was in the forefront, the treated wood was actually doing more harm to the environment than good. More often than not, treated wood will contain chromated copper arsenate, also known as CCA – a form of arsenic. CCA is a poisonous chemical that’s bad for the soil, humans and yes – pets. Thankfully, in 2004 The Mulch & Soil Industry developed industry standards that are used today, which includes prohibiting the use of CCA-treated wood in all consumer mulch and soil products. The Mulch & Soil Council (MSC) seal was developed to inform consumers which mulches are up to code. There may very well be some independent companies that are still selling CCA-treated mulch, so your best bet is to shop at a well-known retail store and ensure the MSC seal is printed on the bag. 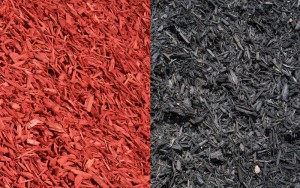 What if the mulch is dyed? Mulch colorants nowadays are made using either iron oxide (for red) or carbon black (for black), both deemed safe for use around pets and humans. In fact, iron oxide can be found in many cosmetic products while carbon black is virtually used in every consumer product that is made of rubber. But again – better safe than sorry – be sure to purchase mulch with the MSC seal of approval.

What won’t they chew on?

Here’s where things get a tricky as this question pertains to the individual dog, not the dog population as a whole. Some dogs won’t eat any of it, some – any type of mulch is appetizing. You will need to judge for yourself what type of material you think your pup would be so inclined to devour.

What is probably the most obvious type that comes to mind concerning the ingestion issue is rubber mulch. Rubber mulch has been said to be a great eco-friendly alternative to use in gardening. It is made from recycled tires and can last many more years than conventional wood mulch.

But when we hear “rubber” we think of all those rubber dog toys we see at the pet store. So how will he know the difference between whats mulch and whats a toy? If you compare rubber mulch with traditional wood mulch, they are actually very similar in size – much smaller than your average dog toy. Your dog may not find it satisfying enough to chomp their teeth into such a small item. But of course there are plenty of exceptions. There are the small dogs with tiny mouths that would see this as an adequate size for their chew toy entertainment, then there are the dogs diagnosed with the Pica condition that causes them to have a compulsive desire to eat everything in sight regardless of its taste.

Rubber mulch has been used in thousands of U.S. parks, soccer fields and stadiums by reason of reducing landfill waste along with the elastic and shock absorption properties – making it much safer for children and athletes in the case of a fall. Freedom Bark Park in Lowell, Indiana was one of the first dog parks to use the recycled material and won the 2009 “America’s Best Dog Park” award given by Dog Fancy Magazine. Unlike wood mulch, rubber mulch does not retain any liquids such as water or urine making it easy to rinse off, diminishing any odor that may arise.

Unfortunately, it’s not all good news. There has been some controversy over the years concerning the potential dangers of the rubber. The Environmental Protection Agency (EPA) has reported that benzene, mercury, styrene-butadiene, polycyclic aromatic hydrocarbons, arsenic, heavy metals and various carcinogens have been found in tires which can emit gas over time when left in the heat, potentially damaging your soil and being inhaled by those nearby. After several studies were conducted, the EPA concluded that these gases were not at high enough levels to be considered harmful. Many doctors and toxicologists argue this conclusion as the studies were performed over the course of just a few short months and only in a handful of fields. The Consumer Product Safety Commission (CPSC) admits the research is of limited scope and certainly has not analyzed any long term effects, yet despite the lack of testing, both the EPA and CPSC continue to promote the use of rubber mulch. 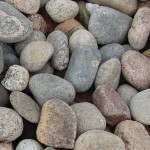 As mentioned earlier, rubber mulch does not retain any liquids – this is due to its non-porous surface. Rocks, similar in nature, can also be easily hosed off on a regular basis. Just make sure to use smooth, round rocks rather than jagged pieces that could cause pain to your dog’s paws. The one disadvantage of using rocks is that it won’t really add any additional nutrients to your soil. 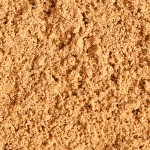 Sand, on the other hand, is by far the hardest if not impossible to keep clean. Picture a litter box but for your dog. The best way to clean any urine spots, is to simply scoop up the clumps. Be prepared to give more doggie baths as you also run the risk of the granules clinging onto their fur when wet. Some swear by using cheap material that they can replenish on a monthly or bimonthly basis. Materials such as leaves, straw, and pine needles are inexpensive enough that you may not mind simply removing a section of it when it gets too grimy and replace it with a new bag.

Cedar mulch is meant to last at least one year, but tends to absorb moisture and whatever bacteria goes with it. Despite popular belief, you do not want to allow any dog waste to stagnate and let break down on its own, as it can contain any number of parasites that can seep into your ground, endangering the health of you and your family.

With whatever mulch you choose to go with, just make sure to scoop on a regular basis. We recommend using a poop scooper with a rake-like end rather than a pan in order to better separate the poos from the mulch pieces. Be sure to have a broom handy to sweep any mulch that might have gotten out of place.

Can I just avoid having my dog in the mulch altogether?

You may prefer a setup where your mulched garden area can be separate from your dog’s play area. How can one accomplish this? Here are several methods to try out in order to keep your four-legged friend out of the garden.

Repellents: You can purchase an odor repellent from your local pet store to mist the mulched area with. Numerous DIY recipes can be found online to ward off your dog. Ingredients like pepper, crushed garlic, onions, cayenne pepper, or dry mustard have been shown to discourage dogs due to their off-putting smells. Be sure to dilute in water first to use more as a spray as you are only trying to spread the food’s scent, not the actual food. You will probably need to reapply the repellent after any heavy rain.

Plant blockade: There are some plants that canines just hate the smell of – Coleus Canina (a.k.a. “Scaredy cat”), Ruta Graveolens (a.k.a. “Rue”), citronella, rosemary, lavender and lemongrass are just to name a few. Avoid setting up thorny or prickly bushes to try to keep them out as it could poke them in the eye or jab them in their skin. Instead, plant some hedges that are too tall for them to jump over.

Rougher mulch: Purchase bags of Pine Bark Nuggets, a larger type of mulch that will be hard (but not painful) on their feet and dogs will typically find this material too uncomfortable to squat on.

Chicken wire: This trick may not keep your dogs off the mulch, but it will most likely stop them for digging. Prior to laying down the mulch, put down a single layer of chicken wire on the ground. Whenever your dog tries to dig into the mulch, his paws will keep getting caught up in the wire and he will eventually give up. And if your dog is anything like ours, where they can’t dig, they won’t go.

Is there a perfect type of mulch for a dog?
Tagged on: backyard safety